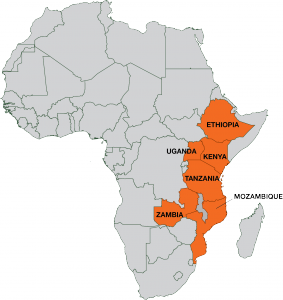 DTMASS operates in six countries in eastern and southern Africa (Kenya, Uganda, Tanzania, Ethiopia, Mozambique, and Zambia), where climate change is hard-hitting, subsistence farming is a major livelihood, and maize is the major crop. These six countries alone account for more than 252 million people in 21 million households, and make up over 25% of sub-Saharan Africa’s population. Close to 136 million people rely on maize as a staple, while roughly 30% of households are headed by women.

Growing improved, drought-tolerant maize is a way to improve food security and livelihoods of these millions of vulnerable households.